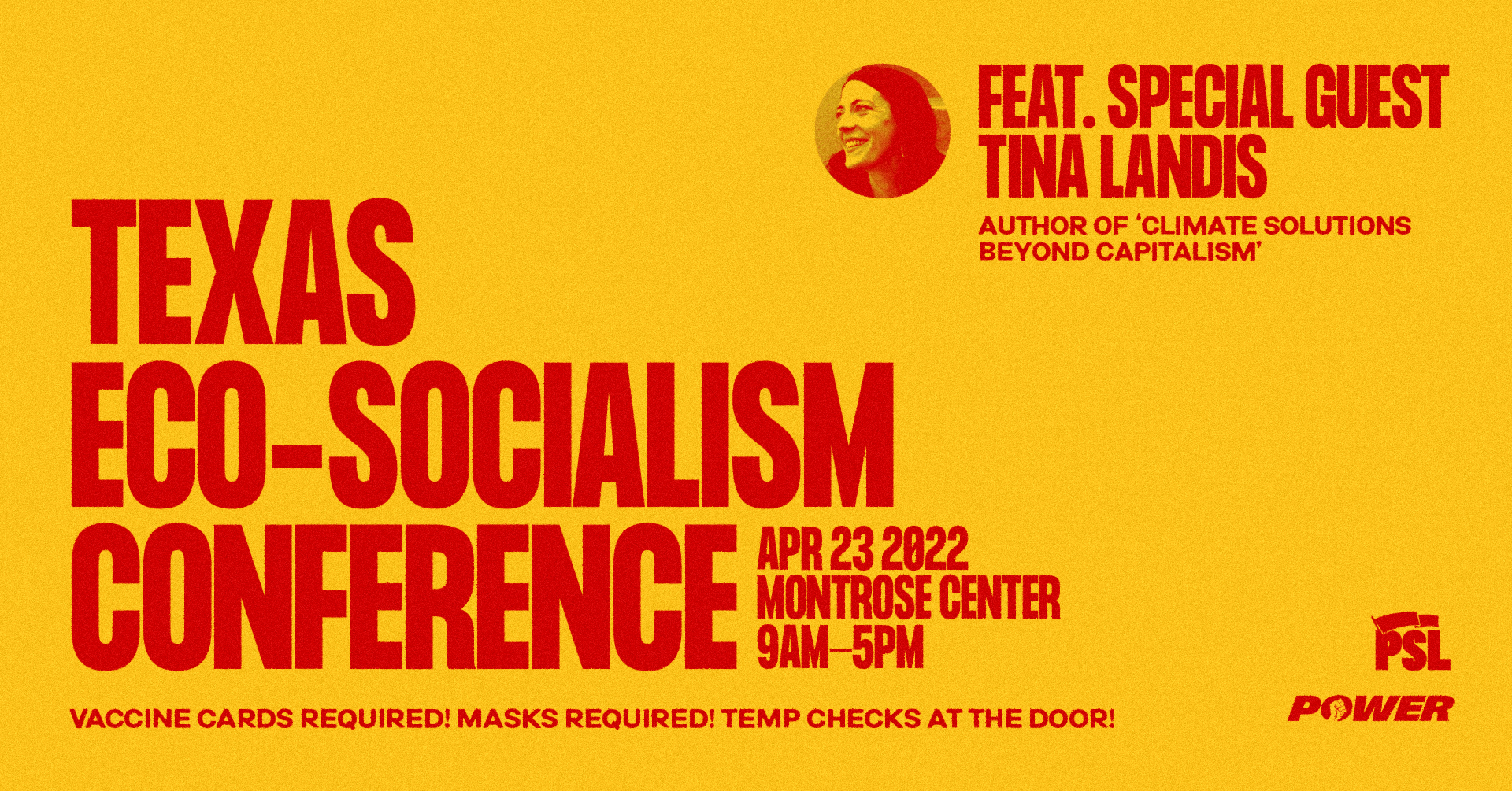 On April 23, branches of the Party for Socialism and Liberation from across the state of Texas and POWER (Public Ownership of Water and Electric Resources) will host an Eco-Socialism Conference at the Montrose Center in Houston from 9am - 5pm. We will be joined by Tina Landis, author of Climate Solutions Beyond Capitalism, as our keynote speaker, and host a selection of plenary discussions and workshops focused on environmental struggles and socialist solutions to them. Lunch will be provided for attendees.

The mainstream media invokes fear around the rapidly changing climate and offers little solutions to the crisis. In Texas, climate change lead to the winter storm of 2021 which plunged the state into freezing temperatures. Millions of Texans lost water and electricity and hundreds of people lost their lives. A privately run energy system caused predictable and unnecessary suffering and death that was not “inevitable" but the logical outcome of a system run not to meet people's needs, but to create corporate profits. Until utilities are put under public ownership these kinds of tragic events will continue.

At the present rate of emissions, out-of-control climate change will catapult global average temperatures so high that it will usher in a period of irreversible environmental crisis within the lifetime of many people alive today.

As we saw during the 2021 winter storm, the wealthy will use their money to escape the consequences, and working people and the poor will be left to suffer. Globally the developing countries of Africa, Asia and Latin America, responsible for a tiny fraction of global emissions, will face the worst impact!

The attack on the ecology of the Earth is caused by capitalism, the system that dominates nearly every corner of the world, a system that conflicts with environmental sustainability. Capitalism’s basic driving force is the endless expansion of profits and wealth for corporations, regardless of environmental boundaries. For capitalism, the environment is not a place human beings must live together with Earth’s other species, but a place to be exploited in the process of accumulating profits.

It is becoming more apparent every day that the system itself is the biggest barrier to resolving the crisis.

Socialism is the alternative to capitalism’s war on the planet. Socialism represents a future where workers have seized political and economic power away from a handful of billionaires, and deploy resources according to a plan for what society needs. Socialism means organizing the economy, investing in and implementing already existing technologies to quickly transition towards the end of fossil fuels.

Today, at this urgent period in human history, we must fight to preserve the planet. The solutions are there! Collectively we can overcome the odds. The ecological and socialist transformation of society is possible! Join us in Houston on April 23, 2022 to learn more and get involved in the fight to save the planet!